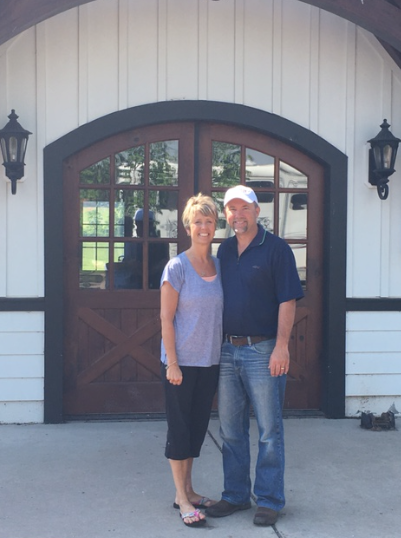 Feature the Breeder is a new monthly article we are starting in order to bring some attention to the many wonderful and varied breeders we get to work with because of our stallions. Everyone has their own story to share, and we think you will find all their stories as interesting as we do.

“How do I get started…My grandfather Roy Near ran a small stable and was a trainer/driver for around 30 years from the 1940’s thru 1968. Eventually he

he decided it was too much and walked away from it, taking a factory job in Marysville, Ohio where he worked up until his retirement in 1978. My grandfather had thoughts of breeding Standardbred’s in his retirement years at my parent’s small farm outside of Milford Center, Ohio. but passed away suddenly 3 months after retirement and never had a chance too. ”

“I was born in 1966 and really was not around the business. I remember seeing the pictures, photos, blankets, and old tack around his house from the training and racing days. I remember the stories about a horse that he purchased, I believe at Lexington as a yearling, his name was Speedy Pick, a son of Attorney out ofNoonRush. He broke him, trained, and raced him. Speedy did really well for him and then my grandfather was offered a price he could not turn down. Speedy Pick went on for the Blue Hen Stable and with Charlie Fitzpatrick Jr in the sulky set the world record at that time in 1:58.4 at Yonkers Raceway. I remember as small boy, Grandpa taking me down to Scioto Downs to watch the races with him once and it was so crowded he had to put me on his shoulders so I could see the track. I was 12 years old when he passed away and never picked up the passion or desire for horses that he had.”

“Then I married into a family about 13 years ago that was involved in the Standardbred business. My mother-in-law, Kay Rush, has a farm outside of Kenton, Ohio. She owns horses and is very hands-on from general barn work to jogging and training. Kay’s love for the horses and the sport of racing is infectious. My brother-in-law, Darrell Rush is a small business owner in Dunkirk, Ohio. He owns, trains, and drives horses. Darrell started jogging horses at 10 and called his first horse race at age 12. He called races at 15 fairs for several years as well as a full season in 1986 at Audubon Raceway in Henderson Kentucky. Darrell once called races during a summer with “The Voice” Roger Huston at the Canfield Fair in Ohio. My son, Tyler Rush, left college to pursue his dream to become a catch driver. Tyler is now a second trainer, and drives at the fairs and local pari-mutuel tracks here in Ohio. My wife, Angela, and I are some of Tyler’s biggest fans. We have followed him all over and I believe that spurred my love for the horses and the sport of harness racing.”

“After getting hooked on the sport, I had a desire to buy our 1st horse. I started looking through sale books and studied them for a couple years. Everyone told me to buy a gelding that was already racing, but I am a big dreamer and thought it would be a great idea to buy a mare. My plan was that we could race her and then when her racing days were over breed her at least one time for my grandpa, since he never got a chance. “

“I felt like we would never have the money to pay for a yearling at a sale, so my thought was I needed to try and find a filly with a good pedigree that was already racing. I found Live Wire in the January Tattersalls Mixed Sale at the Meadowlands. I liked Live Wire’s dam, Western Montana. I also really liked her 2nd dam, Incredible Margie, and believed buying into this family would give us a chance to produce good race horses. So we took a chance on her, got a name from someone to call and he put me in touch with Adam Bowden and we agreed on a price and I bought her before she went through the sale.”

“Her name definitely tells it all. Live Wire was always a hand full at the track, but easy to be around in the barn. She has a great personality and is a great mom. Live Wire is in currently foal to Sweet Lou, and we are very excited for our own, “Baby Blaze.”