The House That “Dance” built 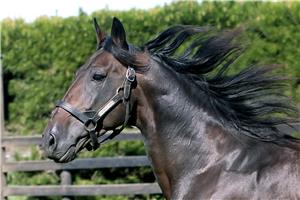 Chicken noodle soup from Wawa. That’s how Jim Mulinix and his wife Ellen celebrated their colt, A Rocknroll Dance, winning the $600,000 Meadowlands Pace. Today should have been the greatest day of their lives, but the Mulinix family hardly had any time to enjoy it. After the race, they still had to take care of “Rock” as Ellen affectionately called A Rocknroll Dance, taking him to the farm where he would spend the night before the 11 hour drive back to Ohio.

After the interviews and taking care of their other horses, Jim and Ellen finally made it back to the hotel room with their chicken noodle soup at 5 in the morning, ready to grab an hour of sleep before making the long drive back to Ohio. Horse racing doesn’t often give a chance to slow down and enjoy the moment, but thanks to A Rocknroll Dance, the Mulinixes were about to get the chance to do just that.

Jim Mulinix grew up in Ohio, riding horses with career aspirations to become a jockey. When he outgrew those plans, he got involved in sports, becoming an all-conference football player while at school at the University of Toledo. Jim got back into horse racing after an ex-girlfriend lived near a harness racing stable. He would go and watch the races and eventually decided to get into harness racing, since size wasn’t an issue for to be a driver.

Jim had a few horses before he even got out of college. He counts himself fortunate to have been around good people, who taught him important skills, like how to do his own shoeing, that led him to be successful with his own horses. Jim mostly stuck to racing in Ohio, content to stay close to home.

In 2010, as he was reaching retirement, Jim decided that once in his life he would like to try it in the “big time”. He partnered with his friend, Denny Miller, and hitched a ride to the Harrisburg Yearling sale. The one and only yearling at the sale that caught his eye was hip 971, a Rocknroll Hanover colt out of Wichita Hanover. The colt sold on the third day, and as the gavel dropped at $15,000, Jim was the new owner of A Rocknroll Dance.

“I was tickled to get him,” says Jim, who looked at hundreds of yearlings before spotting A Rocknroll Dance.

Rock was brought back to Ohio and quickly got with the training program. It didn’t take long for Jim to realize he had something special in the talented colt. Big, strong and with a good attitude, Rock adapted easily to the winters in Ohio. Jim knew his track so well, that he usually didn’t carry a watch, knowing how long a mile was for a normal horse. With Rock, when he carried a watch, he was often surprisingly 10 or more seconds off his calculations, the big horse did it so easily and well with no effort.

After keeping A Rocknroll Dance under wraps during his qualifiers, wanting to make sure the colt would ship well and handle the race day pressure easily, it was time for the big day. A Rocknroll Dance’s first lifetime start had an ominous beginning. The colt was so big strided, Jim had to special order a bike for him. The new bike arrived in the driveway as the trailer was pulling out headed for the track. As A Rocknroll Dance was on the track warming up, a tractor caught the bike, ripping the wheel off and banging up the driver. Jim ran to the paddock and grabbed the first larger bike he could find, an old rattling thing with flat tires, and hoped for the best. “He’ll run away from the other horses,” thought Jim, and sure enough even with the bad start, Rock pulled ahead to place 2nd.

Jim’s first big win with the horse came in his 3rd start, when A Rocknroll Dance won his Metro elimination in 1:49.1 with Ron Pierce. This would be the race that first put Rock on the map, and remains Jim’s favorite win, even topping the 2012 Meadowlands Pace, being that it was his first big win and to do it on only his 3rd start was something special.

Jim remembers the groups of people that would come to the paddock before the race to look at the horses. They would go down the line week after week, and every time would double back for another look at Rock, saying to themselves, “This is the one.” Knowing other people saw the colt’s potential made Jim proud.

At home, A Rocknroll Dance was always very much his own horse. He was solitary and didn’t particularly like attention. However, Rock was also very playful. When you went to the field to catch him he wouldn’t come, and when he did he wanted to play, whether it be chasing or trying to nip whomever was trying to catch him that day. He liked to chase the farm dogs, and if he was ever on the infield paddocks when horses were jogging on the track around him, Rock would be there on the fence line, racing every group that came out.

Jim says of Rock, “It was a pleasure working with him. He never got sick, never got injured.” When partners were brought on, they actually became concerned by the lack of vet bills. So Jim loaded up the horse and brought him to a specialist in Ohio, who declared him a “beautiful animal” and insisted there was nothing that “could be or needed to be done to this horse.”

A Rocknroll Dance retired from the track and headed to the stud barn at Diamond Creek Farm, where he is now standing his 4th year. Jim looks forward to Rock’s career at stud both in North America and Down Under.

“People will be sorry they didn’t breed to him, he is going to have some super individuals.” Jim himself is currently training 3 A Rocknroll Dance 2 year olds, all of whom he says are, “great-gaited, good looking and athletic.”

The lasting impact A Rocknroll Dance had on Jim and Ellen is massive. He gave them the opportunity to purchase a property in Florida, where they now have a few in training at Gilcrest Training Center in Bell, Florida. Jim is thankful to have gotten the colt in the later stages of his career. It gave him the opportunity to be recognized as someone who could train and race a horse in the big leagues, and it gave the Mulinixes the chance to be more financially independent, thus allowing them to slow down and enjoy other aspects of life after working 365 days a year over a lifetime. “I enjoy horses but there are other things in life and I needed to slow down and enjoy them also,” says Jim.

In the end Jim has only one thing to say about his time with A Rocknroll Dance. “It was a pleasure working with him, the only thing I can take credit for is showing up at the race and not getting in his way.”