For much of this season, the talk surrounding Warrawee Ubeaut centered on her maturing into a more manageable horse. On Wednesday (Sept. 18), the filly showed it was not just talk as she put her manners on full display to win the $259,600 Jugette for 3-year-old female pacers in dominant fashion at the Delaware County Fairgrounds. 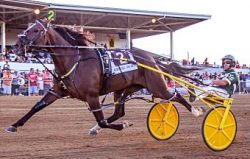 As Warrawee Ubeaut reached the top of the stretch with a comfortable lead in the final, driver Yannick Gingras began the celebration by gesturing toward the crowd and giving an underhand fist pump.

The victory gave Gingras his third win in the Jugette and trainer Ron Burke his record-equaling third triumph in the event, tying Billy Haughton and Bob McIntosh. Burke’s other victories came with Sassa Hanover in 2015 and Darena Hanover in 2012. The Burke Stable has four overall Jugette titles counting the win by Burke’s father Mickey in 2007 with Western Graduate.

Treacherous Reign, who won the other Jugette elimination earlier in the day and forced Gingras and Warrawee Ubeaut to race patiently in the final, finished third.

“Basically, moving forward, I think she’s going to be a great horse because now she’s learning to do that — get stuffed in a hole, back out, and come back again,” Burke said. “That, she couldn’t have done before.”

Gingras said he was comfortable waiting for a second opportunity to try for the lead.

“I wouldn’t have let (Dunn) go if it was the other way around,” Gingras said. “It’s (Delaware), you want to be on the front. But he was starting to grab up pretty much in the first turn and I wanted to keep the pace honest. I knew I was going to have to pull at some point. By making him go a little bit going to the quarter, I figured I’d get to sit a little longer after that.”

Treacherous Reign reached the opening quarter in :26.2 and continued to lead through a half in :55.2. As she raced up the backstretch for the final time, Warrawee Ubeaut came calling again, and this time would not be denied. She passed the leader and cruised to victory from there.

The victory backed up Gingras’ assertation following the eliminations that if Warrawee Ubeaut was as good in the final as she was in the opening round, it would not matter whether she drew post one or two for the final.

“I don’t usually talk like that, but I’m so confident in this filly right now, honestly, I couldn’t see any scenario where she’d lose unless I messed it up,” Gingras said. “And I wasn’t planning on doing that, either.”

She is owned by the Burke Racing Stable, Phil Collura, J&T Silva-Purnel & Libby, and Weaver Bruscemi. She is a daughter of former Burke star Sweet Lou, who was the 2014 Pacer of the Year, out of the mare Great Memories. She was bred by Warrawee Farm.

“We’re super proud of her because of her being a Sweet Lou,” Burke said. “All around, this horse means a lot to us.”