Warrawee Ubeaut had to work a bit hard to gain the front but the Sweet Lou-Great Memories 3-year-old pacing filly was again much the best in the $550,000 Breeders Crown on Saturday (Oct. 26) at Woodbine Mohawk Park for her second consecutive Crown title. 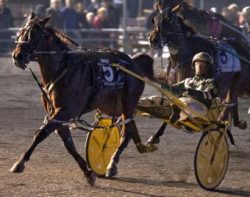 Yannick Gingras let others do the work early as he left with purpose with Warrawee Ubeaut and watched as Stonebridge Soul first sprinted to the lead and then released Treacherous Reign through a wicked :25.3 opening quarter. Warrawee Ubeaut then made a bold bid on the backstretch into a light wind to secure the front in :54.4. From there only Tall Drink Hanover made a race of it, attacking at a distance from the winner through three-quarters in 1:23.1.

Gingras took nothing for granted as Warrawee Ubeaut bore out some in the homestretch, keeping the Ron Burke-trained filly to task. Without question she was once again up to it in capturing her second straight Breeders Crown trophy while sprinting home in a :27.1 final quarter. The mile was paced in 1:50.2 by Warrawee Ubeaut who was an overwhelming public choice at 1-5, paying $2.40 for the victory.

Tall Drink Hanover kept her momentum through the homestretch to gain the place spot with Stonebridge Soul advancing late for third. Sunny Dee and Treacherous Reign completed the top five in the field.

Bred in Ontario by Warrawee Farm of Rockwood, it was the 12th win on the season for Warrawee Ubeaut who is owned by Burke Racing Stable, Phil Collura, J&T Silva-Purnell & Libby and Weaver Bruscemi.

“I talked to Ron (Burke) before the race and we didn’t want to have to go hard into the wind. It didn’t work that way,” said Gingras. “She relaxed so good in the third quarter and I think that’s what won the race for her.”