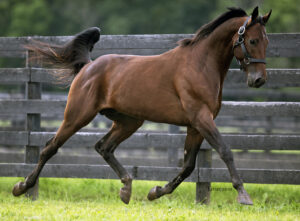 Pulling up to the track with the Round Barn to my left and the red clay to my right, I had no expectation of witnessing history that day. As we settled into the Diamond Creek Farm box, Bob Boni came to sit with us for a chat. His excitement was contagious, you could tell he thought the conditions were perfect for a record mile.

The venerable Pure Country would go postward as the favorite in the Tattersalls three year old filly race. She would not disappoint, overtaking Call Me Queen Be with a patented Sam McKee “Charging Hard” drive to the wire. She came home in 26.2 for a 1:48.2 mile with Brett Miller in the bike.

As we marched across the track to the winner’s circle there was raucous excitement from farm staff, family and friends. Next up Southwind Frank, future Diamond Creek Stallion trained by Ron Burke, would compete in the Futurity. Could he turn the table on Marion Marauder after being upset in the Hambletonian? He nearly did, losing by a head to a late outside surge by the Marauder in the gutsiest of stretch runs. As the story goes, Yannick Gingras’ bike tire was stepped on and Southwind Frank still drug him home flat tire and all.

Then there was Always B Miki, whose ownership had a stallion deal with Diamond Creek Farm. Miki was expected to win in the Allerage Farms Open against Shamballa, All Bets Off, Split The House and Dealt A Winner. The question was how fast could he go around the fastest track in harness racing? No one could have predicted what was in store.

I was fortunate to snag a ride in the starting gate car with track guru Greg Coons for Race 8, The American Ideal three year old pace, which was won by Racing Hill. This was the race before Miki’s mile and Greg was already prepping the track for a world record attempt. Over the walkie talkie I heard, “Is the drag screen working? Greg, should I go around another time?” Greg was tuning the track for Miki, setting the stage for the big horse. This was my first time in a starting gate, which is maybe the tightest and most uncomfortable space I could imagine.

After the starter call, noses were fixed on the gate, the sound of loud snorting, feet pounding the track as the horses revved up to starting speed. Around the first turn, the starting car moved parallel of the field and I peered out the windows, bike wheels and horse legs blurring along with pace as the drivers sat still. What a way for a rookie fan like me to experience the sport.

The weather had to cooperate of course and so far it had. It was a bright and sunny 70 degrees and not a cloud in the sky. No rain for a few days, but what about the wind? Wind speeds had been up to ten miles per hour that day and continued to shift direction. As the post parade for the Allerage Farms Open Pace got underway, the racing spirits blessed us. The wind died down a little and the crowd waited with bated breath wondering what they might witness.

The race was on! I stood on the apron nearest the finish line in a crowd of what seemed like two thousand patrons. The late Sam McKee belted out at the quarter pole as Miki was tipped out “…and Dave Miller lets the Big Hoss roll.” From that point forward Miki ripped off fractions of 52.2 and 1:19.4. Turning for home with the field bunch behind him, Always B Miki was in full flight like a runaway locomotive with David Miller urging him on.

The anticipation of thousands was at a tipping point as Sam McKee voice reached a crescendo, “Always B Miki, 1:46 – World Record!”

At the hallowed Red Mile oval, seasonal patrons of the Grand Circuit meet knew something amazing had just occurred. Amongst the world record miles in Lexington, this one was different. This confirmed what Jimmy Takter suspected all along, that this was the fastest horse to look through a bridle.

Time felt like it had stopped with the race timer. Always B Miki was honored properly with a huge winner’s circle celebration and parade down the track, a fitting ovation on a day that will long be remembered in harness racing history. One in fact that will be seared in my memory forever.